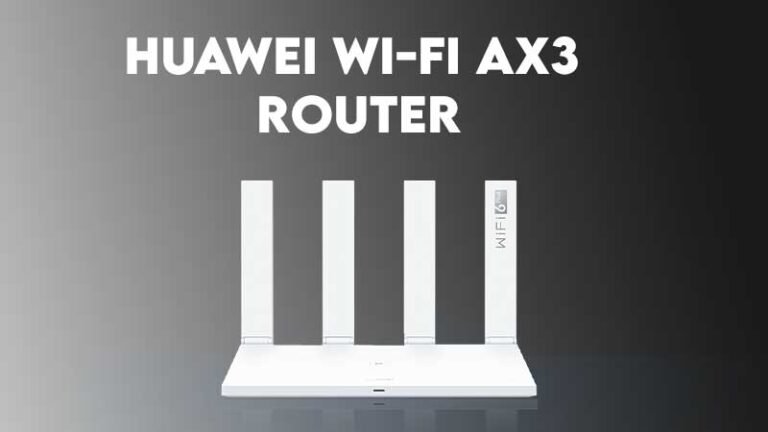 The Huawei AX3 Pro router was recently updated to a new version. The AX3 router and the router were first launched in March last year and have been hot sellers ever since. Rather than the Kirin chipset incorporated in the previous model, the new model uses a Qualcomm processor.

This new Huawei AX3 Pro will be powered by a dual-core Qualcomm chip with a 1GHz clock rate instead of last year’s 1.4GHz quad-core Kirin W650 chip. Unlike the WS7200 model from last year, the WS7206 comes with a new model number.

Why You Should Buy This?

Fast and reliable internet is a necessity in the COVID-19 era. Prior to that, we considered it important but now it is absolutely essential. In the past, most industries have allowed employees to work from home at one point or another, and parents have had to contend with the challenges of online learning when schools were forced to close. Luckily, you won’t have to worry about connectivity issues as the Huawei router for sale is available now.

With the first Wi-Fi 6 plus wireless router on the market, the Huawei Wi-Fi6 AX3 runs at 3000Mbps, which is two times faster than a Wi-Fi 5. Wi-Fi 5 devices and routers are limited to communicating at a bandwidth of 20MHz, but Wi-Fi 6 devices can communicate at a bandwidth of 2MHz. Its powerful signal can easily penetrate multiple walls, meaning it can cover large homes completely.

The HUAWEI Wi-Fi6 AX3 supports multiple connections without being affected by latency. Meetings, meeting deadlines, and attending online classes at the same time, all of which are valuable, require low latency.

You can connect the Huawei Wi-Fi6 AX3 and the Huawei LTE B535 through One Tap Connect if you use HUAWEI Share to integrate your Huawei devices, such as your laptop, smartphone, and smart TV. The result is seamless and smart. Huawei’s proprietary security solution, Huawei HomeSec, can be easily connected to the router.

Remote workers and homeschoolers aren’t the only ones who need these features, but also anyone who wants access to quality audio and visual content (which, let’s be honest, is everyone). The uninterrupted gameplay is sure to impress gamers too.

The Huawei LTE B535, which can be used if your fiber connection fails, is a complimentary companion to the Huawei Wi-Fi6 AX3. With the AX3, you get a mesh solution that integrates the AX3 and B535 to create one of the fastest Wi-Fi networks on the market. As a result, you will have multiple Wi-Fi sources located all-around your house, rather than a single router.

As part of the SmartBroadband 40GB Wireless Package, Vodacom will be selling both the Huawei Wi-Fi6 AX3 Dual Core as well as the Huawei LTE B535 router for a short time only. These two routers, as well as 40 gigabytes of wireless data (40 gigabytes Anytime + 40 gigabytes Nightsurfer), are the result of R309 x 24 months. R99 is required for activation.