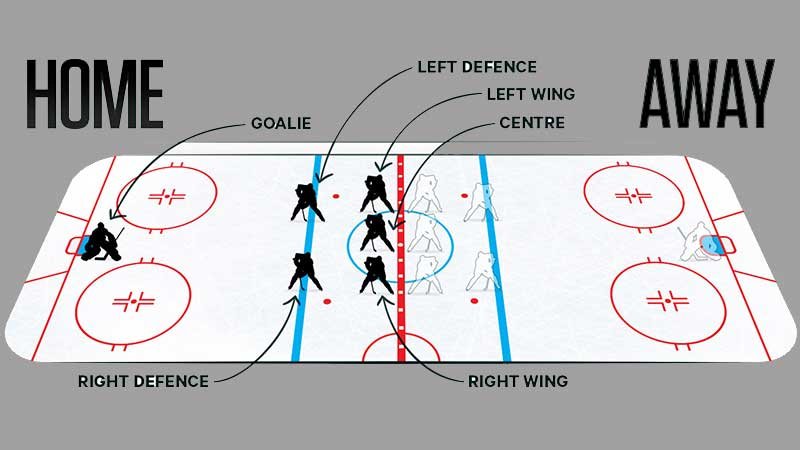 All Positions on Ice Hockey Explained

Hockey is an ancient game which has evolved from time to time, and now it is one of the popular sports among people. It is also enlisted in the International Olympic game.

Perhaps while watching ice hockey, you think there are not lots of positioning from player to player, but the fact is for every team’s players there are different positions. Besides different areas, every player will have different sets of responsibilities.

Here, in the following writing, I will figure out the list of all positions on ice hockey as well as responsibilities. So, if you are interested to know about hockey positions have a read.

All Positions on Ice Hockey Explained

In simple terms, scoring on the opposite team’s goaltender is the key purpose of hockey forwards. To get past the opposing team’s defensemen forwards are generally shorter than defensemen as well as faster and shiftier on their skates.

In the offensive zone, the centre will dictate the game comprises the opposing goaltender to the border. Centres have to cover most of the surface area in the defensive zone from the front of their net to the blue line and faceoff dot.

In both defence and offence centres have various responsibilities. Winning faceoffs is considered as one of the major responsibilities as by this they will gain the possession of the puck for their team.

Furthermore, offer support to their wingers which means to make significance passes, lead fore-check and back-check, and set up the plays in the offensive zone all are vital responsibilities of centres.

Right-wingers play from the right side of the zone which includes the right corner to the right faceoff dot and right front of the opposite team’s goaltender.

In offence, right-wingers are responsible for making fine shots into the opposite team’s goal net. They are also responsible for continuously skating the puck in the offensive zone, scuffling for the puck with opponent players when it reaches to the corner, setting up the play and setting up the team members with good passes, etc.

In defence, they are responsible for back-checking and covering open passing lanes.

The left-winger plays to the left side of the centre-man and opposite of the right-winger.

On defence, the left-wingers play from the blue line to its halfway point, down to the halfway point of the left circle.

On the other hand, in the offence the left-winger play on the left side of the ice rink this includes the centre of the left faceoff circle down to the left corner of the opposing team’s goalie.

Left-winger’s key responsibilities are making good shots one opponent’s net, passing god shots to your centres, carrying the puck in the offensive zone, scuffling for the puck on the borders, and also setting up the play.

In defence, left-wingers’ responsibility is to lock down the opponent’s right defenseman and open down the ice for a breakout to pass.

Read this also: How to Find the Best App to Watch NBA and Basketball Games?

In ice hockey, there will be two defensemen on the ice from each team.

On both defence and offence right defenseman play simultaneously with his or her defensive partner.

While in the offensive zone, the right defenseman has to stay on the top right side of the zone and this consists of the blue line down to the centre ice, the right faceoff dot’s top.

For preventing the other team from making point right defensemen blocks shots, finds and cover open areas within the zone. Also for making sure they are between the puck and their net they keep rotating their heads.

In the defensive zone, they are also responsible for controlling the game and making sure that opponents don’t get a good shot to score.

Both on defence and offence left defenseman play simultaneously with his or her defensive partner.

Same as right defenseman but here the defenseman will stay at the left side of the ice.

This is also similar to the right defenseman’s responsibilities, but the difference is all things will be done from the left side.

When shot from the opponent team comes, goalies are responsible for preventing pucks from entering into the goal bar. Besides, when it comes to the gear colours and their look on the ice goalie has the most ingenious sovereignty.

This writing was all about lists of all positions on the ice hockey. Along with positions, I tried to mention each player’s key responsibilities. I hope you will find this writing useful.